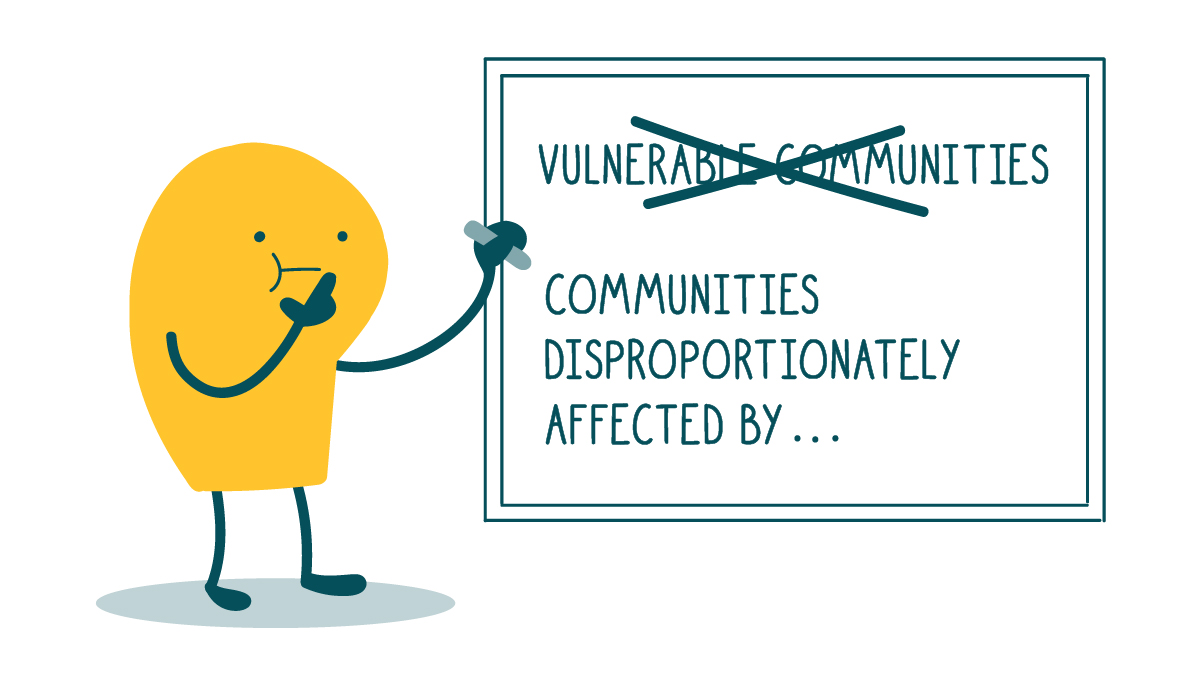 In public health, dear readers, talking about “vulnerable” communities, populations, or individuals is standard fare. We’ve all said it many times when referring to communities we’re prioritizing with our communications or programs. But this week, we wanted to make a case for retiring it from our vernacular. Why? Well, the term can put the blame on the very people we’re trying to help. And beyond that, it’s a card-carrying member of the “just plain vague” club — in a pretty problematic way. So we think it’s time for a change.

We recently went to a conference where Dr. Tabia Henry Akintobi, a professor at the Morehouse School of Medicine, astutely pointed out that calling people “vulnerable” implies that the problem lies with them. This term carries a negative connotation of weakness and seems to suggest that certain people have some intrinsic characteristic that makes them more likely to get diseases or have worse outcomes from those diseases. It puts the onus on the people who are affected, rather than on the public policies and institutional racism that are truly to blame.

In addition, terms like “vulnerable groups” can obscure the actual people you’re talking about. It’s important to acknowledge not only the source or cause of a population’s oppression — but also the identities of the people who are oppressed! Calling a group “vulnerable” and leaving it at that erases specific populations with a vague, useless catchall.

We should note that calling out problems with “vulnerable” isn’t new, but it seems especially important to talk about now. As more and more people are confronting how deeply racism is woven into the fabric of our country and our society, we need to think about how our words could reinforce harmful patterns. When we list race as a risk factor, we conceal racism as the true cause of most racial health disparities — and when we call people “vulnerable,” we risk perpetuating the discrimination and unfair treatment that damaged their health in the first place.

So what’s an alternative? How can we acknowledge disparities without placing blame on the people oppressed by our societal institutions?

When you’re talking to your health-communicating colleagues, consider “disproportionately affected by” (or “impacted” or what have you). It’s not the most elegant phrasing, but it’s accurate and everyone will know what you’re talking about (think: “populations disproportionately affected by COVID-19”). And if you need something more appropriate for consumers, consider the plain language “hit hard by” (as in: “communities hit hard by the pandemic”).

And instead of using “vulnerable” as a catchall, name the groups you mean. Sticking with a COVID-19 example, let’s say you’re talking about racial and ethnic groups that are at increased risk of getting COVID and having worse outcomes. Instead of “vulnerable populations,” list out the races and ethnicities you’re talking about: people who are Black, Hispanic or Latino, and American Indian or Alaska Native.

And if you can, go beyond specificity and describe the root causes that increase health risks in certain groups. For example, you could say: “We’ve identified Black people as a priority audience because structural racism and centuries of disinvestment in Black communities have damaged Black people’s health and increased their risk of getting and dying from COVID-19.”

The bottom line: Calling oppressed communities “vulnerable” puts the blame on those communities — and leaves too much room for interpretation. Let’s stop using it!

Tweet about it: We use the phrase “vulnerable communities” a lot in #PublicHealth and #HealthComm — but it’s pretty problematic. @CommunicateHlth explains why: https://bit.ly/3q5BKy5